You may recall hearing your parents tell you never to eat wild mushrooms because they could be poisonous or fatal. And while this is a true statement, it is also an overstatement. The reality is that many people in the United States have an underlying level of fear about mushrooms, both magical and culinary.

If you are a novice to the world of mycology, fear not! This article will help get you acquainted with fungi forms, a step that some practitioners believe is helpful when preparing for a magic mushroom trip or ceremony.

Mycophobia was coined as early as 1887 by British mycologist William Delisle Haye who noted mushrooms were on the low rung of the culinary pecking order among British society.

Those who sought mushrooms were considered “a sort of idiot among the lower orders. No fad or hobby is esteemed so contemptible as that of “fungus-hunter” or “toadstool-eater”… if it were universal, one would be inclined to set it down as an instinct… but it is merely British. It is so deep and intense a prejudice that it amounts to a national superstition.” As mycologist David Arora notes, the fear remained, with the average American viewing mushrooms as “the vermin of the vegetable world.”

Valentina Wasson, a Russian pediatrician and mycology enthusiast, noted this trend while traveling with her husband Gordon, a banker fellow mycology enthusiast. The two observed that the contrast between “mycophobia” and “mycophilia” differentiated the United States from other cultures. The Wasson’s curiosities inevitably led them to Oaxaca, Mexico, where they sought out Mazatec curandera María Sabina to facilitate a velada, a magic mushroom ceremony. After Gordon published the encounter in Life Magazine, a cultural curiosity around mushrooms emerged in the United States — not just for magic mushrooms, but mycology and medicine more broadly.

Now that magic mushrooms are being decriminalized at both the local and state level, amateur mycology will likely see another period of revival. Culinary mushrooms have never been more popular in the United States, and fungi are finally having their time in the limelight for all of their outstanding industrial and medicinal applications. For a deeper dive, Merlin Sheldrake’s 2020 book Entangled Life helps illuminate the magic of mushrooms and the mycelium web that connects the entire planet —yes, even the seafloor.

Now that we have moved through the fear, let’s learn more about the mushroom life cycle.

If you can recall biology class, you may remember that mushrooms are the fruiting body of an organism that lives beneath soil’s surface. For a poor comparison: the mushroom is to mycelium as the apple is to a tree. But, mycelium is not typically psychoactive, although some modern growing methods claim some species produce psychoactive mycelium.

The life cycle of a mushroom has several stages, but we will summarize it in only three for the sake of this article. The first stage is the spore, which are seeds that can reproduce. When they find a suitable substrate, they grow into mycelium, a web of mycelium that forms an interwoven mat across and within the substrate. It extends outward and branches, searching for nutrients. When the time and conditions are right, the mycelium begins to shift energy toward fruiting.

This second stage is called the primordia. In this stage, you can see hints of the color or shape the mature fungus resemble later on. This process is sometimes called “pinning,” referring to the tiny pinheads of future mushrooms that are beginning to form. When these primordia grow big enough and produce fruit, they become what we call and consume, as mushrooms.

As this mushroom grows and matures, which may take only a few days, it develops and releases another round of spores, restarting the life cycle as these incredibly resilient microscopic seeds move through the world and search for a new place to grow. They are in the air, on our clothes and shoes, and can turn up in the most curious of places.

Above the mycelium, the mushroom has three distinct parts. The cap is called the pileus, the stem is called the stape, and the gills are referred to as lamellae. Depending on the type of mushroom, there may be a small ring of tissue called the annulus connected to the stem, and the mushroom may appear to be growing out of the substrate through a rounded clump of mycelium, known as the volva.

The anatomy of mushrooms will vary depending on species, but the most critical points to remember is that mushrooms are identifiable by the pileus, the stape, the lamellae, and also the spore print. Mushrooms can look identical but produce different colored spores. These spore sprints can be stored and preserved and used as “seeds” to start the life cycle of a new mushroom colony.

Magic mushrooms grow worldwide, and over 200 species contain psilocybin, the most well-known psychoactive compound found in magic mushrooms. But, psilocybin is not the only molecule that can induce a psychedelic experience. Take, for example, its evolutionary chemical ancestor, muscarine.

Amanita muscaria may be the most recognizable magic mushroom. With its thick white stape and bright red pileus covered in white scales, this fairy-tale mushroom has a long history of use among indigenous cultures of Northern Scandinavia and Asia. There have been claims that the red and white mushroom and the psychedelic mindstate they cause were the origins of Santa Claus folklore. Still, some psychedelic historians doubt this to be accurate as there is no evidence of Santa in the indigenous cultures that use the Fly Agaric.

More often, people cultivate magic mushrooms — which is a federal offense in that they contain psilocybin. The most commonly cultivated magic mushrooms are in the psilocybe genus. Psilocybe translates in Greek to “psilo,” bare, and “cybe,” head. Though not all Psilocybe mushrooms conform to this description, many of them do. For a deeper dive into them and the dozens of unique strains in the Psilocybe genus, start here.

Though rarer to find, many magic mushrooms in the Panaeolus genus are prized for their potency. These mushrooms produce characteristically black spores and have pronounced gills beneath the pileus. The name “panaeolus” means all variegated in Greek, alluding to the prominent gill structure, which tends to always feature speckled or spotted patches on closer examination. The commonly known “Blue Meanies” mushrooms are, in fact, the Panaeolus cyanescens.

While psilocybe species tend to get most of the magic mushroom attention, the wood-loving Pluteus genus was first recorded in Europe over 200 years ago but is also found in North America. These small mushrooms are distinctly different from their fellow psilocybin-containing cousins. The pileus can mature into a deep blue-green color with silvery felt-like hairs on the cap and stape. As they age, the gills change from white to pink to gray. The Pluteus genus tends to be the last fungi to the party, devouring whatever is left after primary decomposers have moved through.

For any culinary foodie, truffles are considered a prized ingredient. Without getting too far into the details, one might think of a truffle as a root vegetable, compared to a mushroom which would be more of a fruit. Truffles are technically in the Tuber genus of fungi, and technically, truffles can only be found in that genus.

When someone refers to magic truffles, they are actually referring to a mass of mycelial tissues called “sclerotium.” The sclerotia stores up nutrients and compounds in a sort of dormant state, as the mycelium waits for the proper environmental conditions to fruit. These magic truffles are still packed with psychoactive compounds like psilocybin — they just don’t look as familiar or perhaps as appealing.

While the world of magic mushrooms is diverse and beautiful, most of the recognizable features will be lost once the medicine is harvested, dried, and processed for consumption. If not properly prepared, dried mushrooms can contain additional contaminants like mold that could theoretically contribute to gastric upset. Those who microdose psilocybin mushrooms will often grind up several grams of magic mushrooms and place them in gelatin caps, at which point any visual differentiation between strains, species, or genus would be lost.

A final thought: As U.S. culture begins to unravel its long-held fear of psychedelic medicine, it may also unlearn some old stories about mycology in general. Like most drugs, a little harm reduction and preparation, and a lot of education and guidance, can go a long way to promote safety and well-being. Though synthesized psilocybin might be gaining the attention of drug developers and legislatures, those familiar with the entourage effect of whole plant medicines believe that there is still much to learn about these therapeutic fungi that grow abundantly throughout the world. 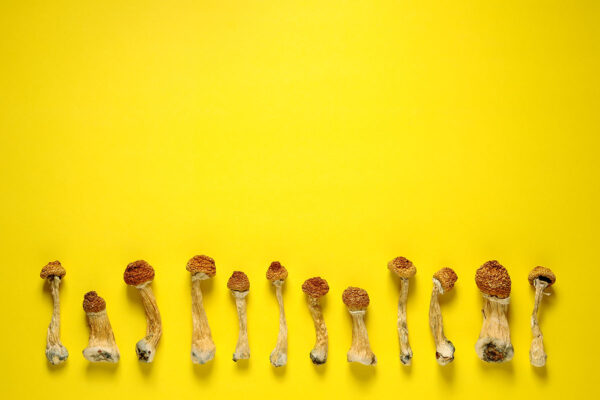